IT Outsourcing to Eastern Europe IT outsourcing is now far more than just a trend or innovation. Each day more and more companies entrust their IT-related tasks to outsourcing partners benefiting in many ways. Eastern Europe is one of the most effective IT outsourcing destinations. In this article we will talk about peculiarities, principles and main facts of IT outsourcing to Eastern European countries.

Advantages of IT Outsourcing to Eastern Europe

Allowing IT outsourcing companies, located in CEE (Eastern Europe in particular) to solve IT-oriented tasks and issues a customer obtains the following advantages:

A Warning to Remember

However, despite the attractiveness of IT outsourcing you should be aware of possible negative consequences of transferring part of your business ideas to another company. First by such a decision, a company trusts another organization a share of their commercial secrets, exposing themselves to the risk of confidential data leakage. Sometimes it turns out that an extra effort should be done to hide some of the data on the application architecture and key business processes from an outsourcing partner.

Certain types of risks can be reduced through appropriate administrative, legal and organizational measures (to agree with an outsourcing partner an undertaking of a confidentiality agreement and the presence of regulation on commercial secrets requirement, classifying the content of outsourcing work as its part). Always remember about security and ask your outsourcing partner about measures it takes to protect the privacy of your data.
At this page you can find security measures on the experience of our company: Security in Zfort Group.

On the bright side, since 2003 Eastern European IT market has become one of the most promising markets in IT outsourcing, demonstrating dozens of positive examples that justify its right course.

Close mentality features in comparison with representatives of Indian and Chinese IT markets.

According to the data of IDC worldwide international IT market research and consulting firm, in 2010 local CEE vendors reported that nearly two thirds (65.8%) of their offshore and nearshore related deliveries were IT services related. National Association of Software and Services Companies (NASSCOM) stated that Eastern (and Central) European region has captured a share of 20% in total number of new delivery centers established all over the world in 2010-2012, managing to leave behind all regions except South Asian.

A Few Words about Ukraine

According to “Exploring Ukraine IT Outsourcing Industry” Report of the Ukrainian Hi-Tech Initiative, the association of Ukrainian software development and IT outsourcing companies, published in summer 2012, over the last ten years the volume of software development and IT outsourcing services, which Ukrainian companies provided, has grown by factor ten with more than one billion dollars in its volume and the number of employees working in the IT field counted more than 25,000 people. 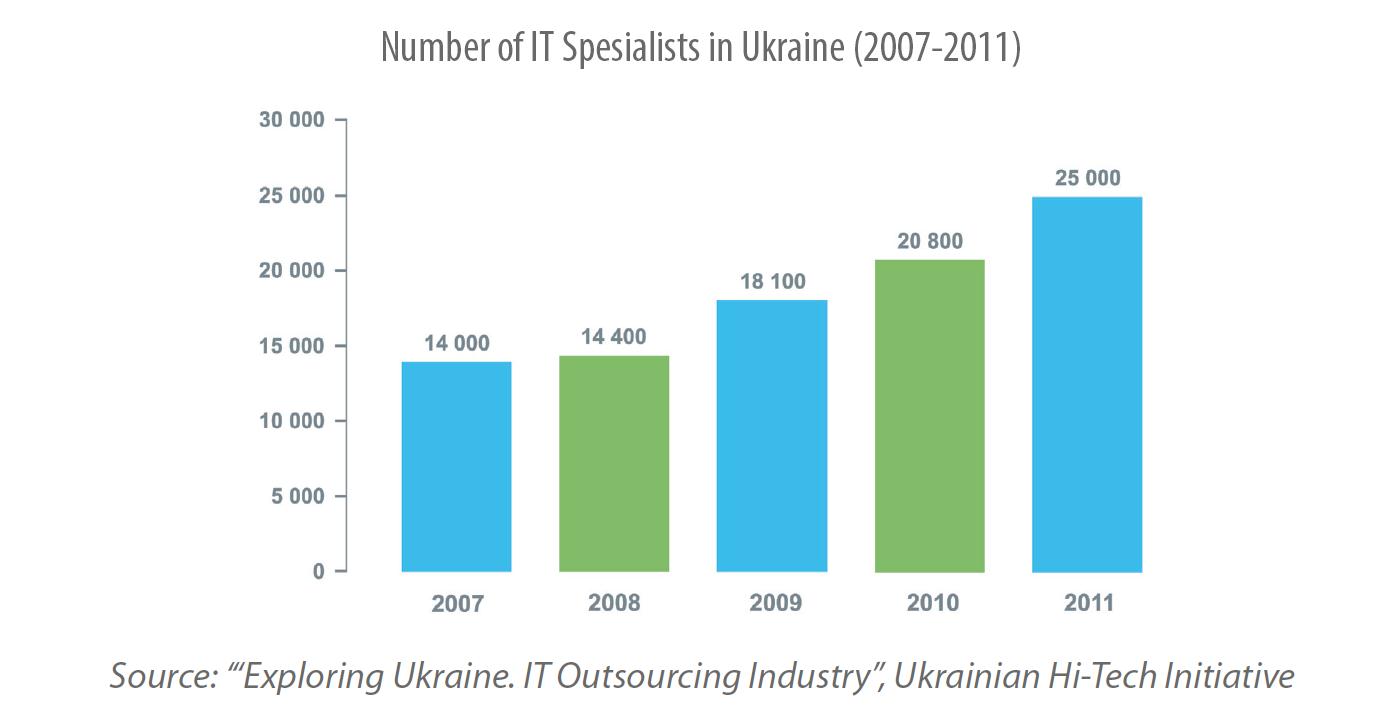 No matter all the great characteristics described above, the major problem of Eastern European IT outsourcing is in conservative views that are sometimes very hard to break. Often business owners do not even consider Eastern Europe as an option to outsource an IT part of their business to. However, this has been changing recently, and statistics shows the tendency toward Eastern Europe more and more each year.

Reasons to Choose Eastern Europe as IT Outsourcing Destination

There are many reasons to choose Eastern European countries for outsourcing IT area of the business.

IT Salaries 2013: Ukraine Versus USA, UK and Germany

Top IT Outsourcing Trends for 2019

How IT Outsourcing Benefits Businesses

Select a date Select a category Search with Google